Alofanib helped to stop the development of the disease in 70% of patients. Such data were obtained during a clinical trial of an innovative anti-cancer drug developed by Ruspharmtech, Skolkovo resident (VEB.RF Group), in patients with metastatic stomach cancer.

In a multicenter phase 1b clinical trial, the first to be conducted in humans, the toxicity of various doses of the drug, pharmacokinetics and efficacy were evaluated. The allosteric inhibitor of fibroblast growth factor receptor type 2 (FGFR2), Alofanib, is the first original targeted drug in Russian oncology that entered clinical trials in patients with solid tumours.

Alofanib helped to stop the progression of the disease in 68.4% of patients and also led to a significant reduction in tumour mass even at the initial dose (50 mg/m2) with a duration of disease control of 18.5 months. Patients with liver metastases, which are considered an unfavourable prognostic factor, also had a treatment effect comparable to that of the general group. The median life expectancy of all patients at the first dose level was 12.6 months. 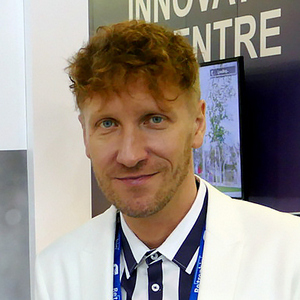 Ilya Timofeev
director of the Bureau for Cancer Research, member of the ASCO International Group, one of the authors of the study of the drug
According to statistics, stomach cancer is in the TOP-5 most common malignant neoplasms in Russia in terms of incidence and mortality. This tumour has an unfavourable course and a large number of patients are at the stage of metastasis. 5-year life expectancy, in this case, does not exceed 5.5%. The success of therapy is associated with early lines, and in the case of disease progression after standard treatment, the median life expectancy drops to 4-5 months. We believe that the results of the phase 1b clinical trial allow us to continue the study of Alofanib in a phase 2 registration clinical trial in patients with metastatic stomach cancer. The drug was well tolerated, none of the patients withdrew consent due to tolerability and the mode of administration of Alofanib. Also, the first signals of the effectiveness of the drug in patients who have exhausted the resource of treatment were note.

The patients included in the study had gastric adenocarcinoma with multiple metastases to various organs, including the liver and bones. Previous attempts at chemotherapy, modern standard targeted therapy and immunotherapy were unsuccessful – the tumour continued to spread, the patients’ health deteriorated. In this state, patients began to receive intravenous administration of Alofanib. 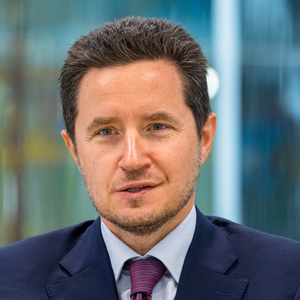 Kirill Kaem
Senior Vice President for Innovation at the Skolkovo Foundation
Support for the development of innovative drugs in the field of cancer therapy is one of Skolkovo's key priorities. Using the classical approach to the development of a chemical drug (small molecule), colleagues at Ruspharmtech have created an innovative drug. It helps not only to block the constantly mutating receptors of cancer cells but to twist them, which allows the drug to act on the tumour despite the mutations. We are proud of the results of our resident's clinical trials, as Alofanib is already prolonging the life of patients when other drugs have failed.

Alofanib therapy was well tolerated, with 71.4% of patients experiencing treatment-related side effects. More pronounced toxicity grade 3-4 according to CTCAE criteria was observed only in 6 patients (28.6%) and was not related to the dose level. The maximum tolerated dose has not been reached, so future trials will start with Alofanib at a dose of 350 mg/m2.