China has made its latest patent amendments effective from June 01, 2021, reforms which are likely to ensure protection against untimely and unfair generic competition. As a result, the Chinese pharmaceutical market makes itself further competitive and conducive for innovative research companies, both regional and international, says GlobalData, a leading data and analytics company.

Although China has made patent law revisions previously, the highlights of the latest reforms are the drug patent linkage system, introduction of patent term extension for drugs and the patent term compensation system.

The Chinese regulatory landscape has seen major overhauling with the introduction of renewed and expanded Marketing Authorization Holder (MAH) System in December 2019, the new and revised Drug Regulation Registration (DRR) in March 2020, introduction of break-through therapy designation in July 2020.

Patent law revisions are the latest strategic developments by China which are a welcome change for pharmaceutical innovator companies. Patent reforms by China following the recent drug regulatory reforms will be looked upon as a greater opportunity to incentivize research and bolster entry into the world’s second largest pharmaceutical market.

GlobalData’s report, ‘China – Healthcare, Regulatory and Reimbursement Landscape’, reveals that the pharmaceutical industry of China is expected to reach $300.9bn by 2025 at a Compound Annual Growth Rate (CAGR) of 12.2%.

Ms. Sahu adds: “Despite being a generic market historically, China has made significant reforms to drive innovative research within the country. Notwithstanding the negative perception owing to the COVID-19 pandemic, China continued to implement major drug regulatory reforms and clinical trial guidelines which ensure faster turnaround of regulatory approvals. Against this backdrop, lucid patent guidelines become more relevant than ever. Domestic pharma companies who have forayed into innovation of late are the most likely benefactors although this will also benefit international innovator companies as well.”

According to GlobalData’s Pharma Intelligence Center Chinese patent authority is ranked on the top with 16,983 pharmaceutical grants issued so far in H1 2021. 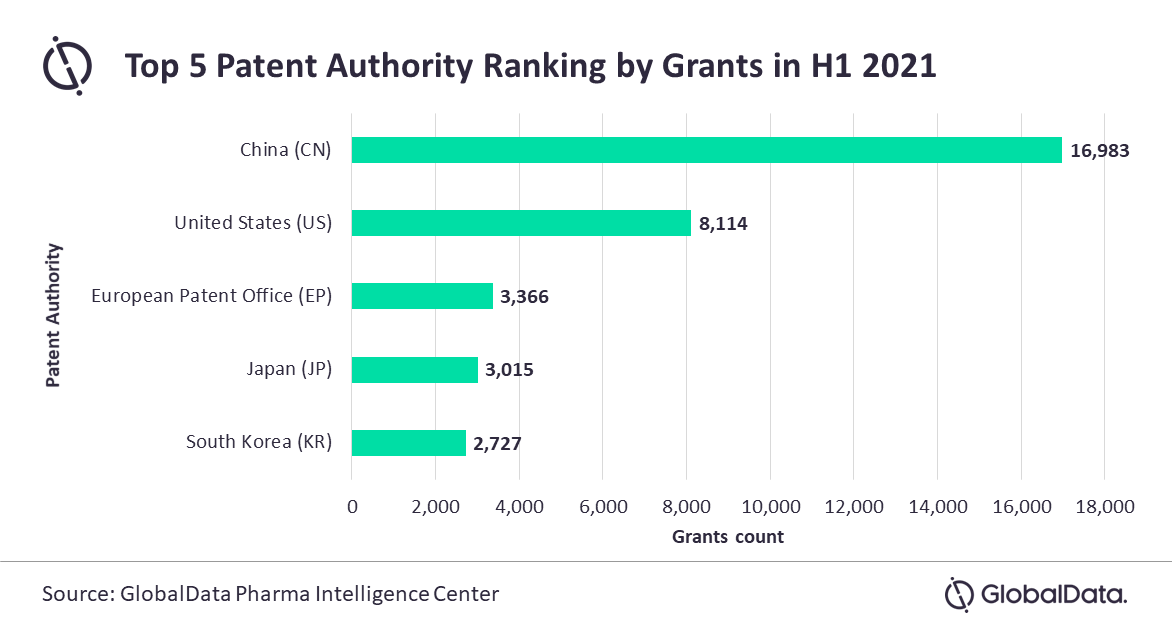 Ms. Sahu concludes: “Although China tops the patent filings and grants chart, much of it is driven by domestic filings. As China gains center-stage in the APAC region for many international pharmaceutical collaborations and deals based on novel therapies, it becomes imperative to have robust patent laws to protect the interests of the innovating stakeholders. Longer exclusivity is likely to attract international innovator companies, which will ensure the Chinese patient population gain access to novel branded therapies.”