The U.S. Food and Drug Administration has expanded its recall to include another Similac PM product. The Centers for Disease Control and Prevention (CDC) announced one additional illness of Cronobacter sakazakii with exposure to powdered infant formula produced at Abbott Nutrition’s Sturgis, Michigan facility.

Cronobacter sakazakii, formerly known as Enterobacter sakazakii, is a germ found naturally in the environment. The germs can live in dry foods, such as powdered infant formula, powdered milk, herbal teas, and starches. Cronobacter infections are rare, but they can be deadly in newborns. Infections in infants usually occur in the first days or weeks of life. 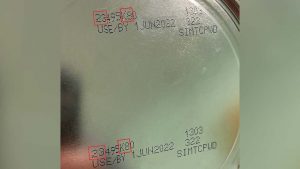 The most recent patient was reported to have consumed Abbott Nutrition’s Similac PM 60/40 product with the lot code 27032K800 prior to Cronobacter sakazakiiI infection. The FDA and CDC informed the firm of these findings and on Feb. 28, 2022, Abbott Nutrition voluntarily recalled Similac PM 60/40 powdered infant formula with the lot code 27032K800.

This is a specialty formula for certain infants who would benefit from lowered mineral intake and was not included in the previous recall. At this time, Similac PM 60/40 with lot code 27032K80 (can) / 27032K800 (case) are the only type and lots of this specialty formula being recalled.

This particular lot of Similac baby formula was distributed in the U.S. and Israel, according to the FDA.

the U.S. Food and Drug Administration announced it is investigating consumer complaints of Cronobacter sakazakii and Salmonella Newport infections. All of the cases are reported to have consumed powdered infant formula produced from Abbott Nutrition’s Sturgis, Michigan facility. As a result of the ongoing investigation, along with the U.S. Centers for Disease Control and Prevention and state and local partners, the FDA is alerting consumers to avoid purchasing or using certain powdered infant formula products produced at this facility. This is an ongoing investigation, and the firm is working with the FDA to initiate a voluntary recall of the potentially affected product.