The production of 20 vital and essential medicines is planned to be launched in SEZ Technopolis Moscow by the end of 2022. This was announced by Alexander Prokhorov, Head of the Department for Investment and Industrial policy of Moscow.

The SEZ resident received a license for the production of medicines and an EAEU GMP certificate confirming compliance with high production quality standards. By the end of 2022, the company plans to launch production of 20 drugs for the treatment of HIV infection, cancer, kidney failure, as well as anticoagulants, chelators and insulins. The first batches of drugs will be produced in the amount of more than 10,000 packages. After production reaches full capacity by 2024, the enterprise will be ready to produce up to 2 million packages per year.

On an area of ​​more than five thousand square meters, Pechatniki site of the special economic zone of the capital houses workshops for liquid and solid dosage forms, as well as a high-tech research and development center. In it, the company’s employees will conduct trials of new drugs that can improve the quality and life expectancy of patients in need of therapy. In total, more than 60 drugs belonging to various pharmacological groups have already been developed in the resident’s portfolio.

Today, AMEDART employs more than 90 highly qualified specialists, including 8 candidates of sciences with experience in major international laboratories and publishing the results of their research in specialized literature, including the journal Science, said Gennady Degtev, CEO of SEZ Technopolis Moscow and added:

A greater number Of Moscow citizens will have access to modern therapy, since the price of manufactured drugs will be lower than foreign analogues, while their effectiveness will be fully preserved. The resident status gives the company the opportunity to gain access to the main preferences that allow them to invest the released funds in developments. 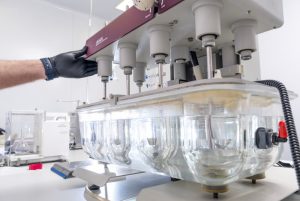